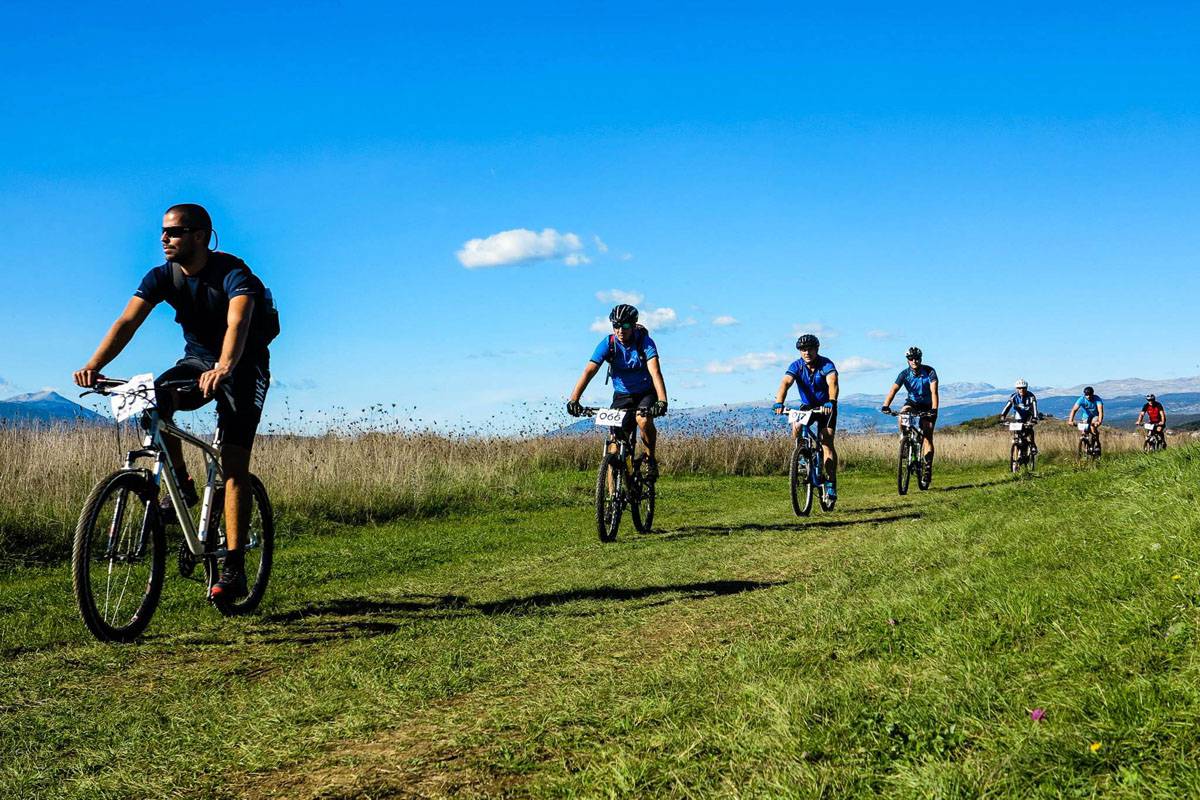 From the macadam field trials ideal for mountain bikes to the asphalted roads for family sightseeing, you will find a huge variety of ideal trails for everyone's taste, amateur or professional.

An 11.6-km long path, starting from Trilj, leads through villages, Strmendolac, and Čaporice. By the side of the road, there are plenty of dirt roads, vineyards, and it is rich with flora and fauna. One of the interesting things is the Surdup spring, which has remained lively for decades; it was discovered between the two World Wars. 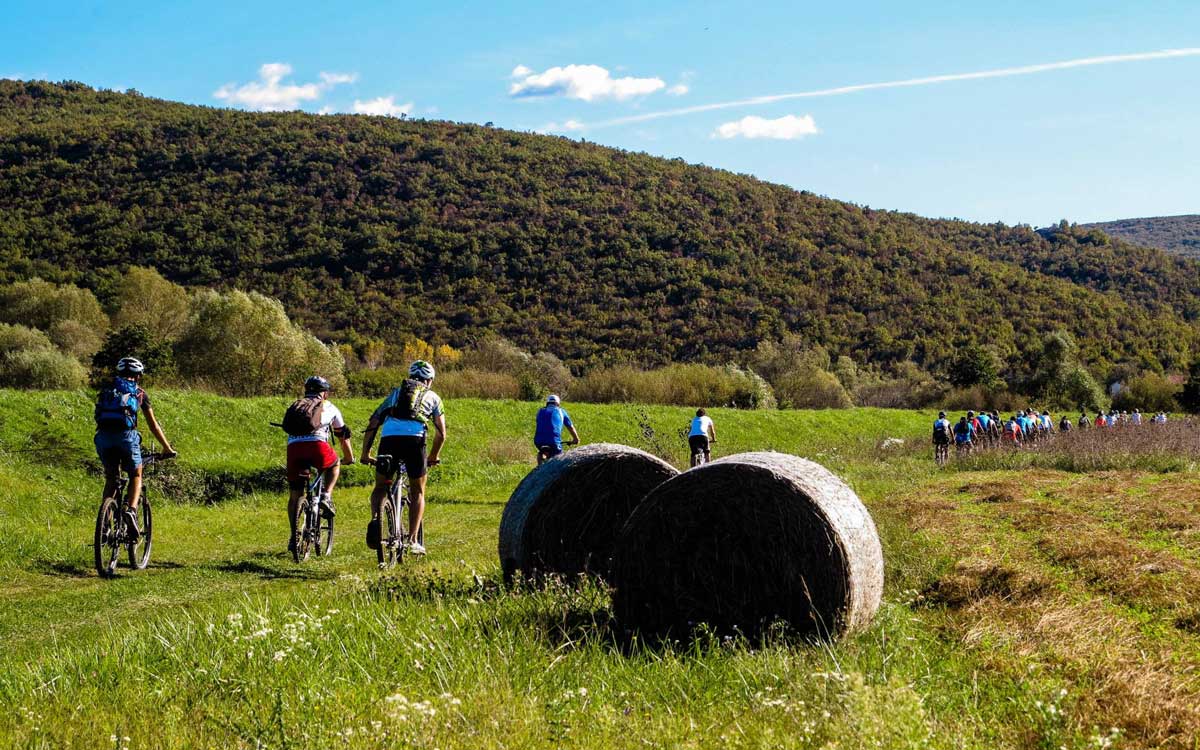 A 25.5-km long walking path offers a picturesque experience of nature in the villages of Grab, Ruda and Gaz. It passes through a complex of 5 old mills, and it came into existence among a pristine-like nature through the source of the Grab river, which has provided the name for the mills.

Samardžića mlinice (Samardžić Mills) on the Grab river. This very valuable rural mill complex was built in 19th century, and, apart from the mills, it consists of a residential house and a stone bridge with two semicircular carriers. The houses were built with affixed stone, and gabled roofs were covered with stone panels. Mills are still functional even today. Within the mill complex there is a barrel-shaped object made of wooden planks (badanj) for washing the wool blankets (biljac).

Bugarinova mlinica (Bugarin's Milll) is nowadays an upgraded house with several floors, and there is a fish farm built in its proximity. There are six horizontal mills in the mill, which are occasionally used even today.

Ćosića mlinica (Ćosić's Mill) is built on the right bank of the Grab River. It has horizontally-positioned mill wheels which are located underneath the building's arches and through which the water passes and launches the wheel. The mill, originally, had 4 mill wheels and stupa (device made of semi-circular shaped trough) and badanj (barrel-shaped object made of wooden planks) which are not wholly preserved. By the mill building there is a horse stable and a floor house where mill workers used to live. Today, the mill is in a deplorable state. A smaller stone bridge made of affixed local stone with four semicircular arcs has been built next to it. The bridge and the mill make up for a unique complex of traditional architecture.

Ursića mlinica (Ursić's Mill) is a smaller mill complex built on one of the sources of the Grab River and it represents the oldest of mills. Due to differences in the water level, it consists of a winter and a summer mill, as well as the mill worker's apartment. Three horizontal mills are kept as they were in the past, and two of them are newer, with iron construction. It represents a unique example of a mill which adjusts to the water level, all while using the mill wheel. 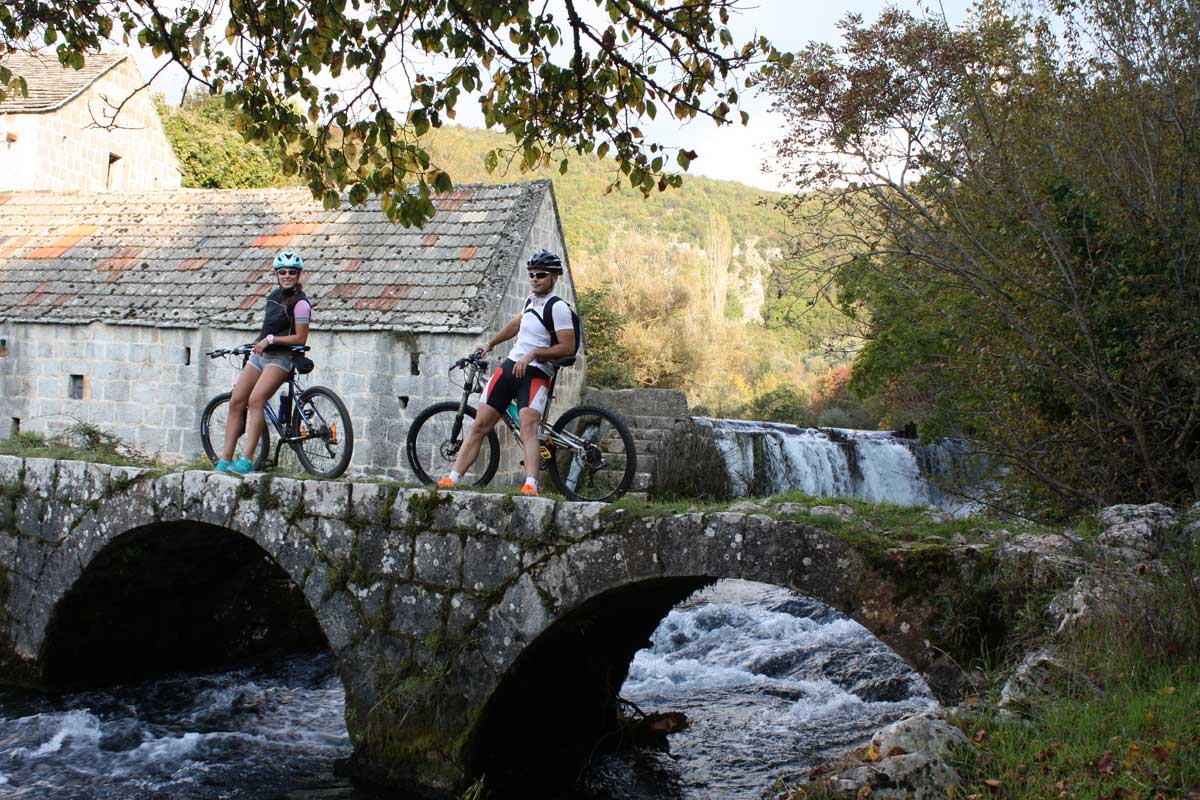 A 37.2-km long path exists here, which starts from Ruda and passes through the villages of Žlabina, Voštane and Rože. One of the longer paths, which combines with roads, provides a unique view at Kamešnica. The part of the path through Voštane is especially interesting, thanks to the tombstone (Stećak) from the Middle Ages called "Na Mašete," and the passing through Rože is particularly interesting thanks to the Church of Our Lady of Good Health. In addition to several gables (Sljemenjaci), there are 40 panels here. A figural representation of the hunter and the hunt are carved into these gables. The cemetery dates to the 14th and 15th centuries. 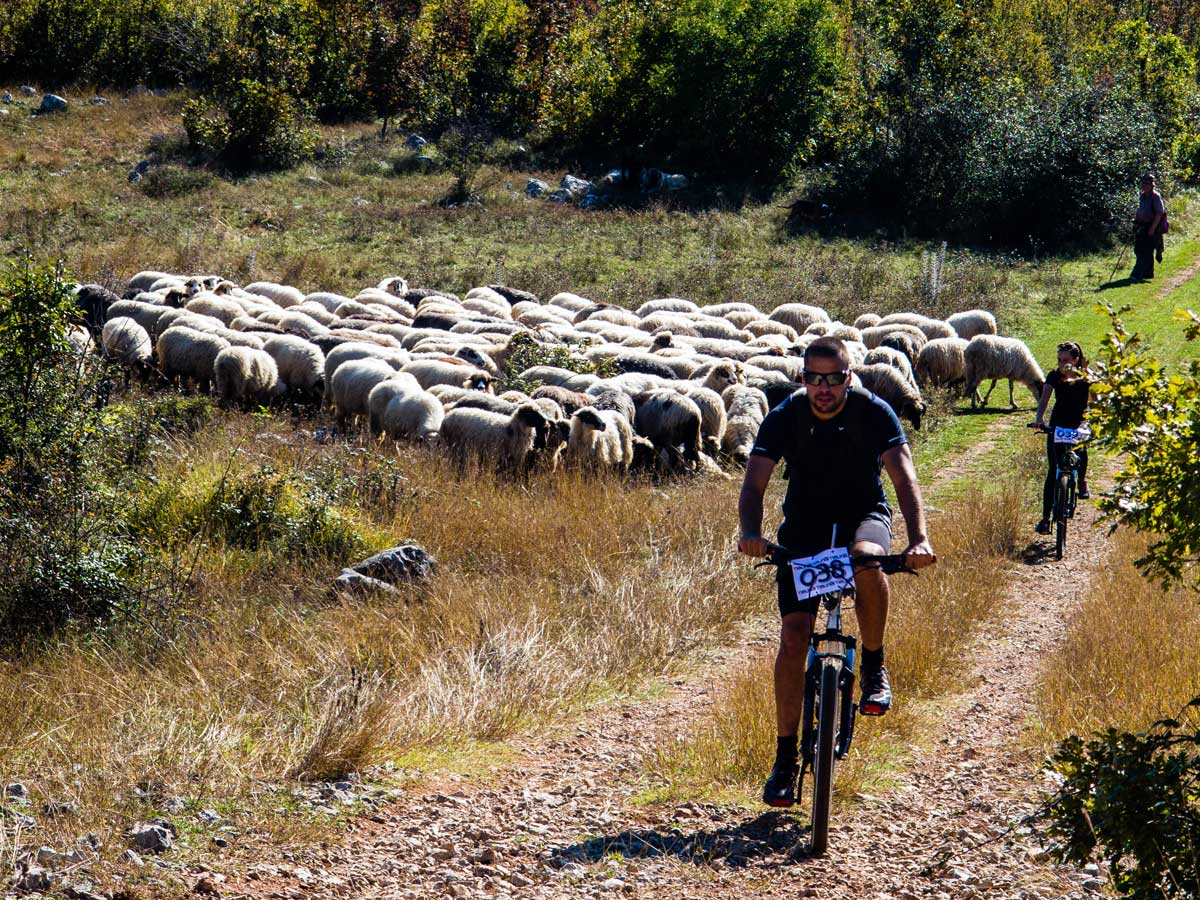 A 10.5-km long path, starting from Trilj and allowing for a visit to a nearby stall, passes through Košuta and Brodarić. There is a cross on Brodarić built by the inhabitants from the Trilj region at the end of 1933 which marks the occasion of 1900th celebration of Christ's suffering and death. The path then leads you by the Museum of Trilj region. This museum explores, preserves and documents the cultural heritage from the Trilj region, mostly archaeological, as well as the ethnographical and culturally-historical one. Preserved museum exhibits include the antique collection that keeps the material from the locality of Tilurium – Roman military camp at the locality of Gardun village; , pre-historical collection with objects from the Neolithic period to the more modern era, when the first open settlements were formed by the Cetina River; a Middle Ages collection with the findings from the Cetina riverbed; a numismatics collection, where the banknote specimens from the antique period found at the Tilurium site were found; and the ethnography collection, with traditional objects important for promoting the knowledge of traditional culture of the Trilj region. 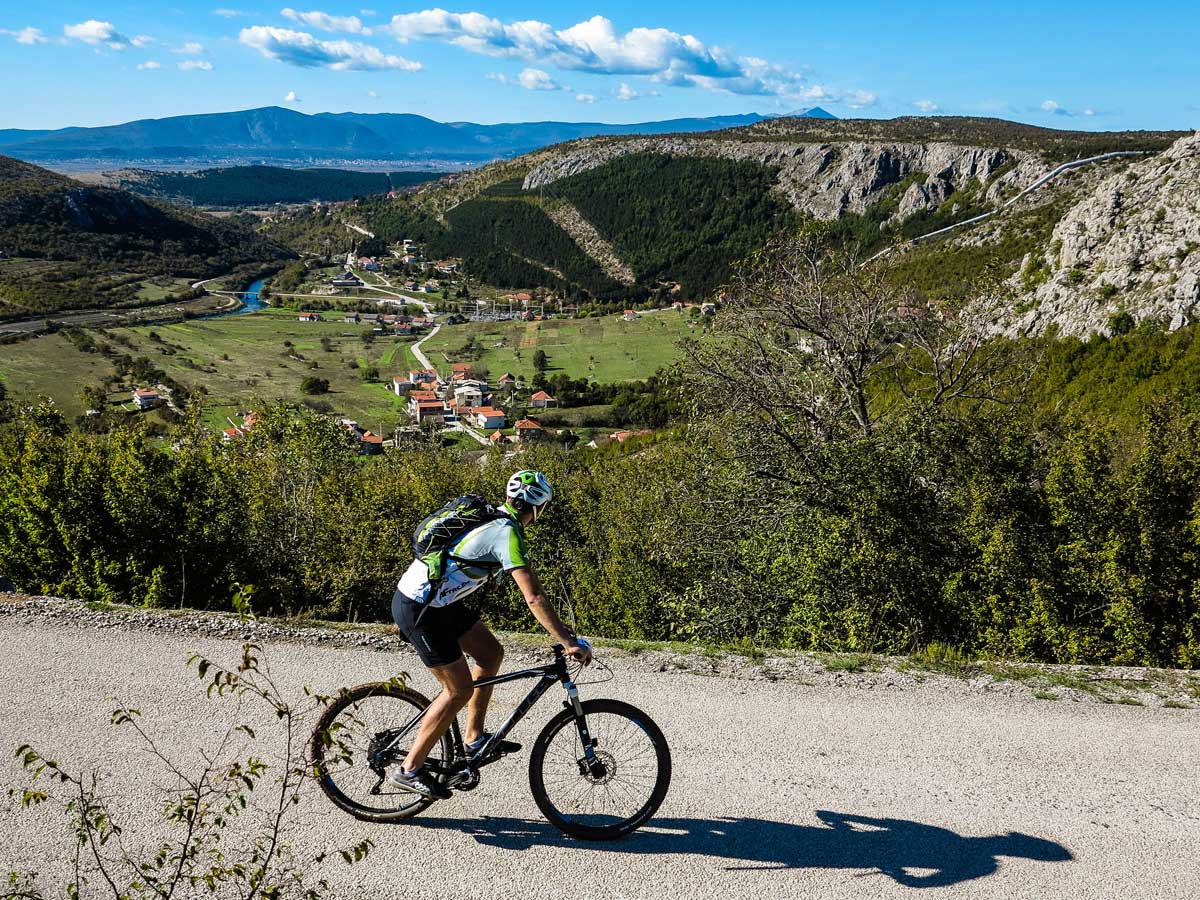 A 15.7-km long path passes through Gaz and Čačvina. There is a sculpture named "Mladenci" (Newlyweds) on the road, created by the author Stipe Sikirca, which is a monument to a man and a woman, a young man and a girl, their love and readiness to carefully preserve their union in good and bad times and to nurture it as the golden basis of a harmonious and long life. On the way through Čačvina lies Čačvina fort, the fort that was built at the elevation northeast from Trilj, with the goal of monitoring one of the most important roads which, since the pre-historical times leads through the Dalmatian inland. It consists of two towers connected with an elongated yard. There is an old parish church with the belfry in front, built in 18th century, underneath the fort. The fort is mentioned for the first time in 1372, and until the beginning of the 15th century it was kept by the Nelipići princes. At the end of the 17th century, it falls into Turkish hands until in 1718 the Venetians occupied it.

There is an archeological site, called Grebčine, on the road. At the local road, in the proximity of Vrpolje village, there is a larger necropolis with tombs. These tombs are mostly monolites of regular shape without any visible ornaments.

A 14-km long path passes through the villages of Gardun and Vojnić. From the road one can see the church of St. Klara, a small single-nave church with gabled roof that was built on the field underneath the Vojnić village. There are several tombstones in the shape of the cross, built in the Middle-Ages, next to the church, as well as at the cemetery of St. George's parish church.

Nutjak fort is located 3 km downstream from Trilj, on the right bank of the Cetina River. It is built on a cliff above the river, not far from the place where Cetina leaves the Sinj field and continues its winding path through the canyon to the mouth of the river in Omiš.