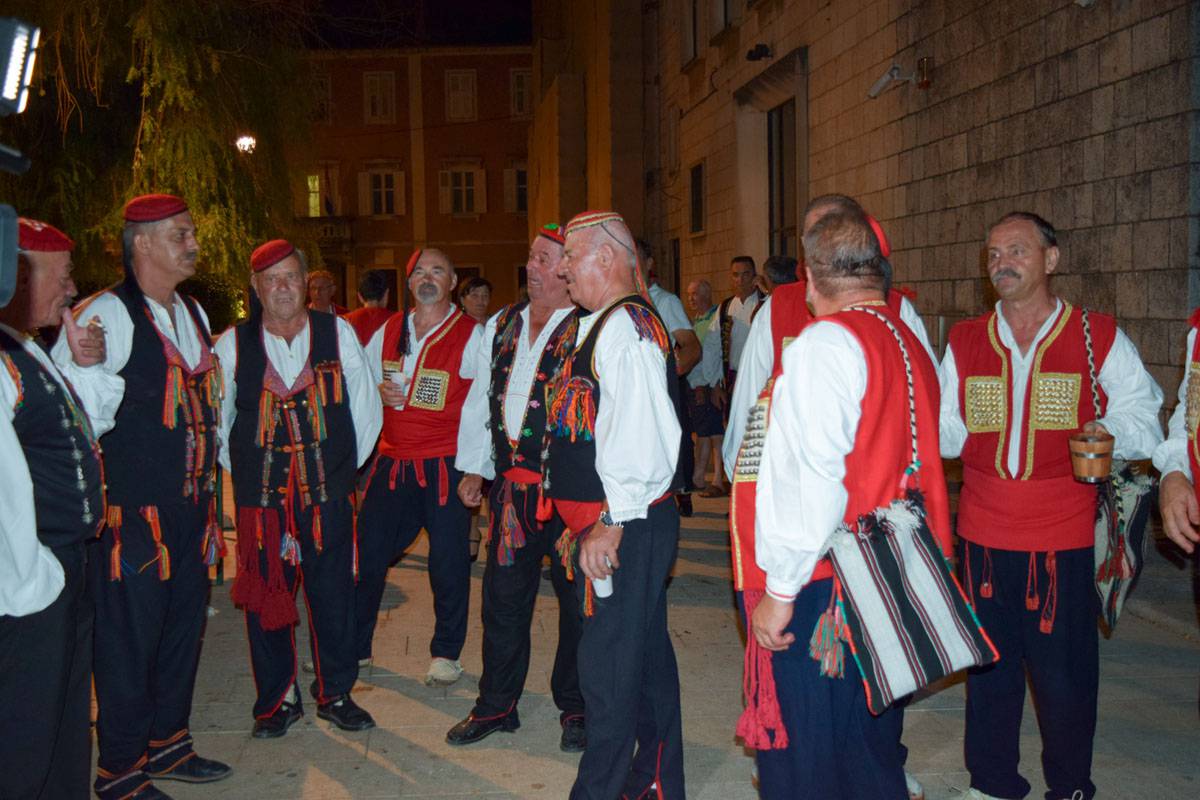 The sound of the old ojkanje, ganga and rera singing have been passed on from generation to generation in the Dalmatian hinterland. Rarely found in black and white, folk verses are nevertheless never forgotten, owing to the inspired youth who preserve the values of their ancestors.

Since the importance of the ojkanje two-part singing, named after a distinctive cry oj (hey), was also recognised by UNESCO, in 2010 it was included on the List of Intangible Cultural Heritage in Need of Urgent Safeguarding. The ojkanje is performed by singers (male or female) using various voice-shaking techniques created by the throat (iz grla). Each song lasts as long as the lead singer can hold his or her breath. The lyrics cover diverse themes ranging from love, geographic, religious, to current social issues. The ojkanje, ganga and rera primarily owe their survival to organised groups of local enthusiasts who continue to pass on the skills and knowledge to younger generations, but they also perform at music festivals in the country and abroad.

The ganga singing was included in 2009 on the Ministry of Culture's list of protected cultural heritage of the Republic of Croatia. The ganga is an integral part of the centuries-old music expression of the regions of Imotski and Vrgorac. Except in our regions, it also appears in neighbouring Bosnia and Herzegovina.

The two-part throat singing, the so-called rera, is characteristic of the Cetinska Krajina Region. The rera is performed at full voice: there is the lead singer followed by the others who actually sing rera.

As a vivid type of singing, deep rooted in the identity of the Cetina people, more often than not the rera describes everyday events, tensions between neighbouring villages as well as those between different characters and customs, it mocks human frailties, very often and using a special vocabulary. The short rhyme, most commonly a couplet, contains such an unusual miniature with a clear message, referring to either the one's sweetheart, mother-in-law, Our Lady of Sinj or to saints. The rera used to spice up and enliven all the derneci, social gatherings or the sila (sg. silo, sitting) and the ašikovanja (sg. ašikovanje, courting). 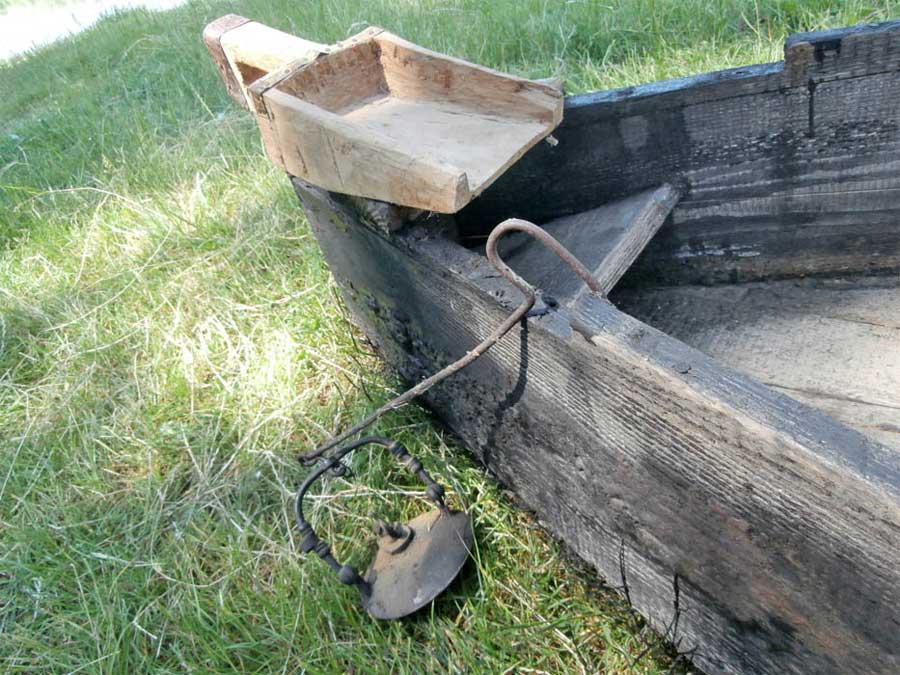 A "small" boat, the lajica, was formerly used for hunting and fishing, and a ''large'' boat for transportation of people, livestock and cargo.

The Cetina boat used to be made of fir, and its sides are made up of warped or two-piece boards. First, a board had to be soaked in water or wrapped in a wet cloth, and then held over burning straw.

In order to prevent water penetration, the stura (dried reed) is put between the bottom boards. The sides of the boat are joined by nails, whereas on both end parts the kuta (triangular reinforcement) is placed, into which is driven an iron link of a chain for mooring the boat. Only one (older boats) or both ends of the boat are used for sitting, people sit on a triangular board following the shape of the boat and level with its sides. The boat is coated with tar for reasons of protection (nowadays, dark paint is used for reasons of environmental protection).

One-piece oars are made of willow and are 2 metres in length each, with the T-shaped handle at the top, the perla. The opalac, made of one piece of willow, is used for throwing water out of the boat. Cetina boat equipment also includes the krdela, a creel for keeping caught fish, frogs and crayfish. The craft of boat making in Otok near Sinj is Croatian Ministry of Culture intangible cultural heritage under protection. 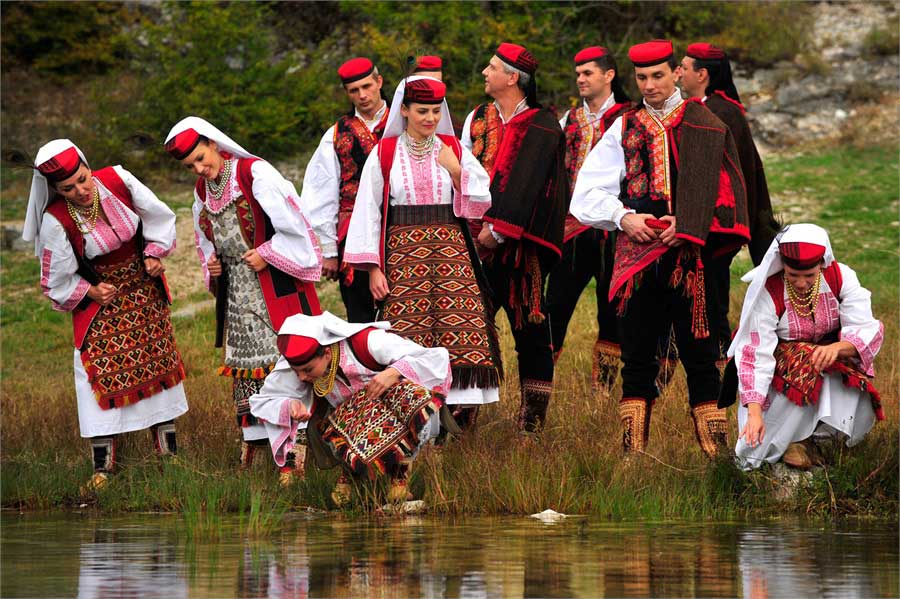 The Nijemo Kolo, a silent circle dance from the regions of the Dalmatian hinterland, is characterised by a unique performing way. It is performed in a closed circle or, more often, with dancing pairs making circular or free movements in a dancing space, sometimes accompanied by the rera, ganga or ojkanje singing or the diple (twin-reed shepherd's flute) but in the Dalmatian hinterland almost exclusively without music. In the wider area the dance is only performed in a circle which makes the very performance of the Nijemo Kolo in the Dalmatian hinterland specific in comparison with the wider area (the Lika region, the islands of the Zadar and Šibenik archipelago, the Ravni Kotari area, neighbouring Bosnia and Herzegovina). Over the last twenty years, in the town of Sinj and its greater area the Nijemo Kolo has been choreographed in stage terms, through which process its figures and movements have been standardised and fixed – all dancers perform simultaneously the same figures (hand gestures) and steps.

The Nijemo Kolo is performed even today, although less often than before, at carnivals, fairs, derneci, weddings, local, regional or international folklore festivals and at local shows on the occasion of the saint days of parish churches. It is still passed on from generation to generation through cultural clubs and folklore groups. Having recognised the value of the Nijemo Kolo of the Dalmatian hinterland, UNESCO included it in 2011 on the Representative List of the Intangible Cultural Heritage of Humanity.