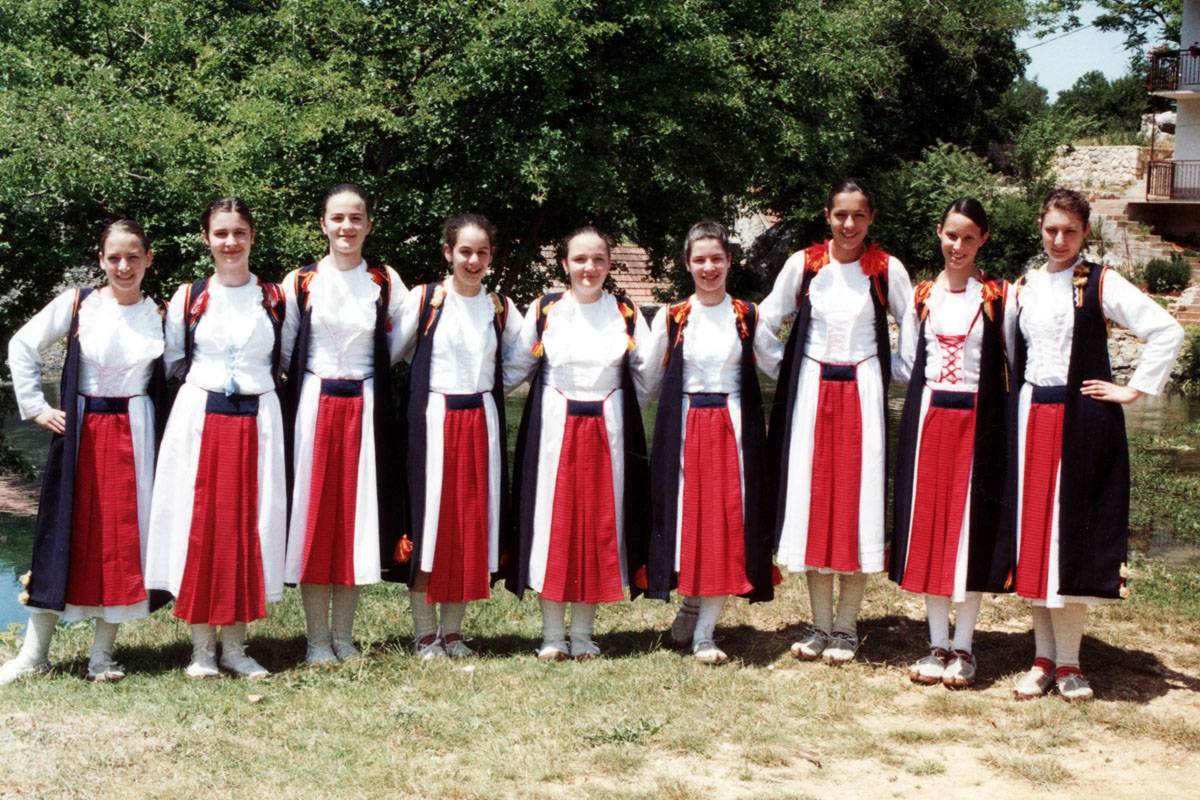 Ethnologically speaking, the area of Trilj belongs to the Dinaric cultural circle, in which wool was the main raw material for the production of the cloth out of which parts of men's and women's costumes were tailored.

The manner of dress was subordinated to tradition, conventions carried over from one generation to the next. The attire communicated messages for every life period, and this was particularly evident in women's costumes, whose ornateness and vibrancy of colour moved upwards from little girls to girls fit to marry, and downwards from young brides to elderly women, where they disappeared completely. One could distinguish between festive and work attire, costumes worn to mark certain customs and holiday ceremonies, and even costumes to communicate grief.

The only linen part of male and female attire was a white shirt with long sleeves, and the rest of the costume was made out of wool. Over their shirt, men wore a krožet, a short sleeveless tunic made of homespun wool, baize or sturdy linen. Over it they wore a jačerma, a short sleeveless tunic made of fine blue wool or baize, richly embroidered and adorned with a number of filigree buttons.

Male trousers – gaće were made of blue wool, had an open front, and were decorated with appliquéd fleece and embroidered with red silk thread – brus. The calves featured a rip – raspor done up with brass buckles. They would wrap their waists in red felted wool girdles two metres long, and special occasions would see them wear plaid Levantine silk. They would also wear a pripašnjača, a girdle made of several layers of leather – listovi – with a man's pistol, cutlass, knife and smokingutensils tucked in the layers, as the symbols of a man's status.

Another part of male attire was the kumparan or dalagan, a short coat with long sleeves made of brown wool, decorated with grindstones and appliquéd red fleece. It was most often worn draped over the shoulders or over one shoulder.

On their feet they would wear woollen socks, bičve, terluci and shoes – oputaši. The soles were made of raw cow hide, while the upper part and sides were woven out of sheep intestines – oputa or shrunken leather strips. The shoes were mostly woven by women.

A man's head was covered with a round cap made of red baize the height of whose rim and size varied from one place to the next. In cold weather the cap was wrapped in a red, black, brown or patterned peškir or saruk made of soft wool or silk for special occasions. 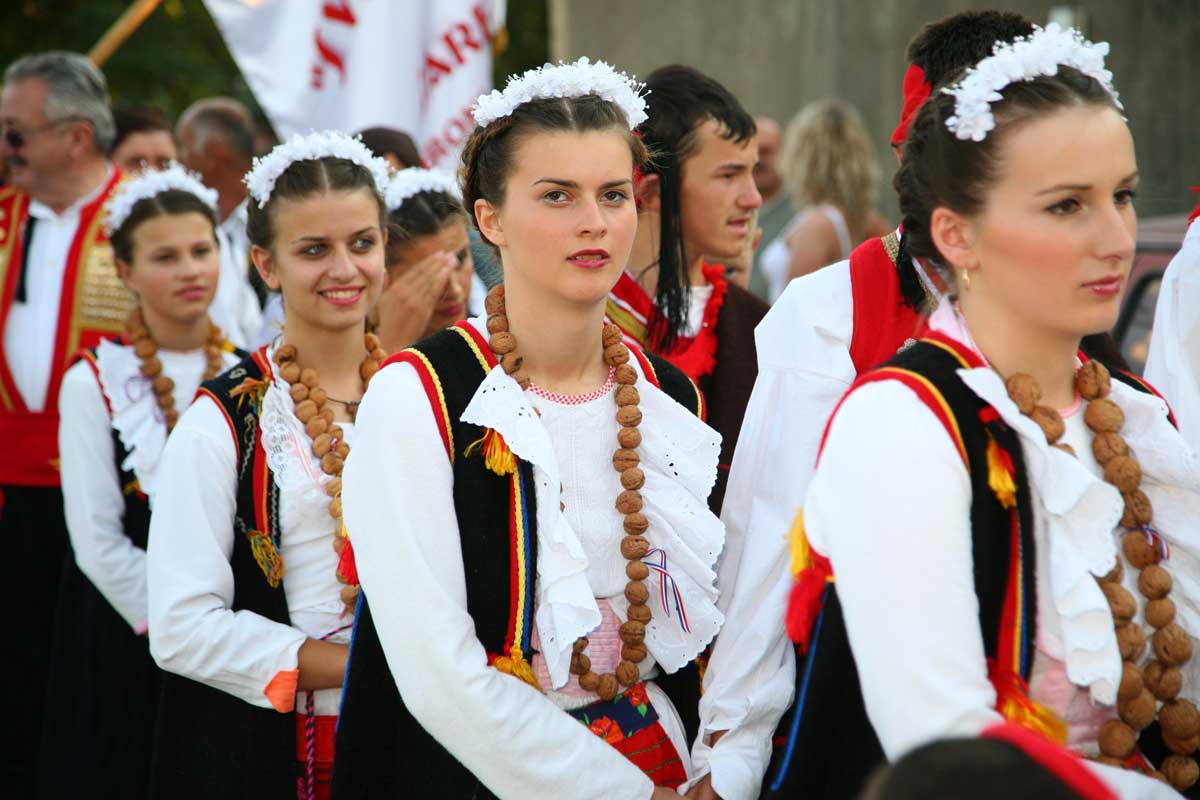 In the area of Trilj there were differences in the way women dressed in villages closer to the field and those nearer to the mountains (Tijarica, Voštane, Rože). The headgear of a bride from Tijarica differed from that of the villages closer to the field. Both brides wore on their heads a crown made ​​of artificial white flowers, but the bride from Tijarica also had a rida - a veil of translucent white fabric that came halfway down her back, and the bride from the village closer to the field also wore a podvezača and cendalj. Podvezača was a white embroidered handkerchief with its rogljevi - edges that reached the ears, decorated with pleats and lace ironed onto them. Cendalji were colourful kurdele – store-bought silk ribbons attached to a girl's braids with a brooch and left to hang down her back.

The girls would wear white linen shirts and primetača – a vest made of white cloth decorated with frills of store-bought lace. They wore šotana s rakamom – white embroidery at the bottom. On top of the primetača they wore an oplećak – a tight tunic decorated with jakići - appliquéd pink silk in the shape of hearts or triangles. On the wings of the tunic – prednjice, there were clips through which a pink silken kurdela – spunčaluk was ran and drawn tight to show off the girl's slenderness. On top of the šotana came an apron made of red wool with an occasional štrika – thread, woven through it, pleated at the top and opijavičena - hemmed with silk. Silk kurdele in pink, blue and red were attached on the right side. Over this came a jačerma in blue wool – a knee-length sleeveless tunic with an open front and decorated with colourful silk brus.

On special occasions, girls and women wore a white or blue kotula vraškarica. The kotula vraškarica consisted of a pleated skirt with an oplećak attached onto it, with no sleeves and an open front, and with little prednjice so as to show off the krožet. The vraškarica was adorned with soći at the bottom - horizontal pleats and black silk kurdela. Sewn underneath it was a firm cloth in some other colour, the so-called pedana, in order for it to "stand more firmly and fall more beautifully". The krožet was a sleeveless jacket buttoned down the chest. The fronts were made of some fine fabric, and the back was made of a lower quality fabric in a different colour. The fronts were dark in colour and with hems made of velud – velvet, around the neckline, down the chest and around the arm holes.

A woman was considered to have dressed tastefully when she matched the colours and materials of her traveš, scarf and krožet. On colder days they wore warm underwear such as a white woollen crocheted šotana - long camisole. In mountain villages, the women wore a woollen modrina with long sleeves, cut and folded along the waist, decorated with red velvet and jakići on the sleeves. In the villages in the valley, women would wear a kurtin – a short fleecy jacket with long sleeves. Guća was worn in cold weather. It was made of homespun wool for everyday wear and of store-bought fine wool – laneta, for special occasions. Women wore their black woollen plet when they went to church.

On their feet they wore woollen bičve and gumaši in winter, and in summer they wore slippers which they would make themselves with wool and thread and take to their shoemaker to have a leather sole and heel – tak, attached.

Jewellery was an integral part of traditional attire. Men's jewellery were the weapons worn in their pripašnjača. Women wore rećine - earrings, gold necklaces with pendants, and rings.